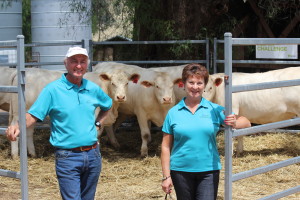 In 2016, our Huon Charolais stud was selected in the top 10 in the RASV Beef Week Heifer Competition. We also entered heifers entered in the 2017 competition.

Over 220 beef studs were involved in 2016 Beef Week, with just over 50 entries in the Heifer Challenge. The Heifer Challenge recognises excellence in herd replacement females and offered a total prize pool of $4500 for 2017. Breeders were invited to display ten heifers from their 2015 calving year.

Beef Week is promoted by RASV as a means for registered beef cattle studs to showcase, market and develop their breeding operation as well as sharing experience and knowledge. Bob Dent, last year’s judge, commented on the outstanding quality of the cattle displayed. Finalists were invited to attend the presentation dinner in Bendigo. We enjoyed an evening of networking and information sharing.